Skip to the content
Home News and Insights GULF NAVIGATION 2.0 SET TO MAKE A SPLASH IN TANKERS

GULF NAVIGATION 2.0 SET TO MAKE A SPLASH IN TANKERS

Two years ago, Gulf Navigation Holdings' directors were despondent. Saddled with high debts and no cash, the Dubai-listed tanker owner's future looked bleak. Not willing to write off its investment, Gulf Navigation's largest shareholder, private equity firm Tabarak Commercial Investments, believed the struggling company could be saved. It led the charge ﻿to install a new board and brought in a professional management team with the wherewithal to turn it around. Tabarak chief executive Ahmad Kilani assumed the helm of the sinking Gulf Navigation, and together with a new C-suite team, carried out what can only be described as a major salvage job. A complete restructuring that has included refinancing vessels, renegotiating loans and debt for equity swaps is nearly complete. Today's Gulf Navigation is on a firm enough footing to renew its focus on the tanker sector and begin expanding its fleet. Neither Kilani nor chief financial officer Ali Abouda make any attempt to hide the dire state the company was in in late 2020. Its debt-to-equity ratio was in the region of 70%, with finance costs on liabilities of AED 580m ($158m) running at between 11% and 12%. Financiers were threatening to take back its ships and were sweeping up all the cash from charter-hire payments. Other ships needed dry-docking, for which there was no money. Just to make matters worse, on 1 September 2020, the day of the first meeting of the new board, one of the company's livestock carriers sank. The new management team would discover that the vessel had been insured for well below its book value.

Action was urgently needed. Tabarak loaned the company cash to satisfy immediate finance and trade creditor claims and restore cash flow. "With any restructuring you need to keep an eye on cash flow, then balance sheet, then profit," Kilani explained. "Cash flow is what leads you into bankruptcy or away from it." Over the next 12 months, the management team addressed the most pressing problems. Loan haircuts were negotiated and new credit lines were arranged to pay expenses, which were slashed by reducing staff and office space.

AT A TURNING POINT

"That was the turning point for the company," Kilani said. With immediate problems partly solved, Gulf Navigation's management could begin addressing its longer-term financial viability. In June, they concluded a refinancing deal for its five IMO type-2 chemical tankers of 46,000 dwt with Jiangsu Financial Leasing. The agreement extends to five years at a low-interest margin not exceeding 4%.

Shortly thereafter, Gulf Navigation paid off the outstanding loans on its two other vessels, the 12,000-gt livestock carrier Gulf Livestock 2 (built 1985) and 5,380-bhp well stimulation vessel Allianz Warrior (built 2007). During the third quarter of 2022, in a debt-to-equity swap with lenders, Gulf Navigation reduced its debt by a further AED 85m. The debt was converted at AED 0.33 per share. The shares were trading at AED 0.31 per share at the time. The arrangement included a lock-in period of one year. Another debt-to-equity swap for a similar amount of debt has been lined up for the fourth quarter. Not only did these moves slash Gulf Navigation's leverage to less than 50% and reduce financing costs to margins of around 4%, they also ended financier cash sweeps on revenue, which meant money was finally flowing into the company's coffers. "This cash up front allows us to buy shares back to benefit share-holders and to look at fleet expansion," Kilani said. The restructuring efforts have been well received in the financial markets. Its shares have risen from AED 0.26 at the back end of 2021 to AED 0.44 at the end of last month. The company's shares have been among the most liquid stocks trading on the Dubai Financial Market over the past five months. Tabarak, which Kilani said likes to invest in listed companies that have turnaround stories and need restructuring, looks set to remain a shareholder for the foreseeable future. "We usually come, solve the problems, and make our money with a fairly quick exit. However, I see the Tabarak board is highly engaged in Gulf Navigation, so I don't expect we will exit over the next three to five years," he said. 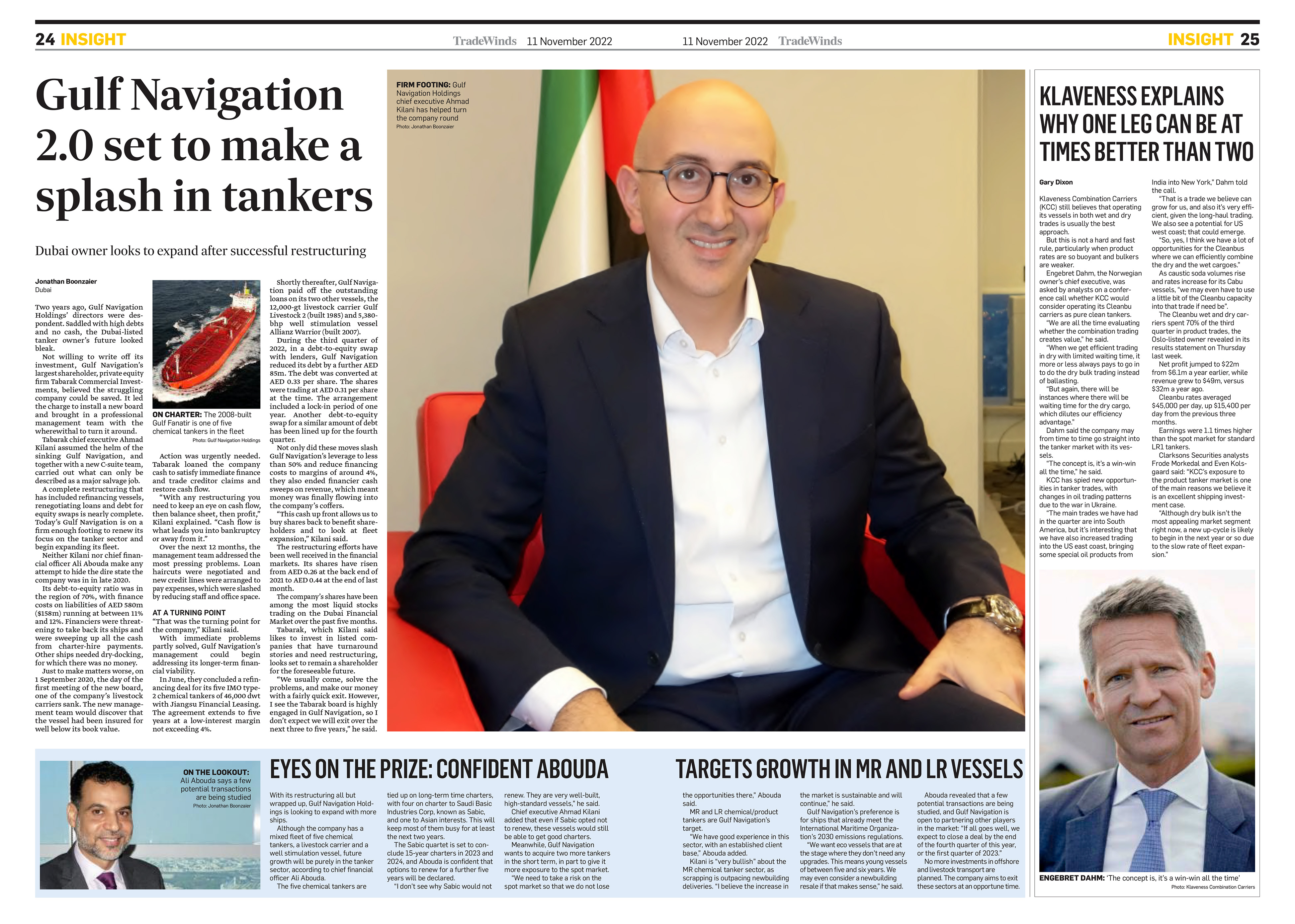 An integrated shipping and maritime services company established in 2003

Get in touch with us

You can find us at